He was born in Adelaide to a mother (Rose) who adored roses!  How could he not be enthused?  He joined the ‘Rose Society of South Australia Inc’ in 1958 and was elected to the committee in 1962, was Vice President in 1964 and President from 1972 to 1974. Walter has been an honorary Life Member since 1978 and has enjoyed growing and exhibiting modern and old world roses for 50 years.

In 1963 Walter began growing plants and exhibiting at the Royal Agricultural and Horticultural Society of South Australia, where he won many medals including the Banksian Medal (twice) from the Royal horticultural Society (UK). And in 1976 he was elected to the Horticulture and Floriculture committee and is currently chairman of this committee.
Walter is now Treasurer and a member of the Board of the R.A.H.S. He enjoys giving talks about roses, and the plants in his garden. If you would like to have Walter as guest speaker please contact us. During his rose growing career he was responsible for the selection and the design of the old rose section of the Adelaide International Rose Garden, the development of the modern rose garden at Carrick Hill, and his roses are  growing strongly in most of Adelaide’s public gardens.

He is co-author of “Botanicas Roses”, and his display garden at “Hughes Park” has featured in Susan Irvine’s “Rose Gardens of Australia”, Country Style, The Stock Journal, The Advertiser, The Australian, Your Garden, and Vogue Living. Also, capturing the beauty of his roses in bloom, The Hughes Park garden was opened for the Flying Doctor Service and raised thousands of  dollars to support this essential service for the people of Australia.

In 1999 Walter and Kay traveled to Lyon, France and secured the French Rose agency of ‘Rose Generosa’………highly scented flowers produced in great abundance…….a delight to be shared with you at their Sevenhill Garden. Life has not been “Roses, Roses all the way”, nor a bed of roses, but Walter still looks forward to the next season, and to the next flower……….and to the maturing of our garden at “The Heritage”. 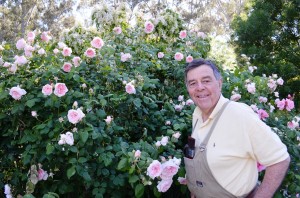 Kaymarie Duncan is a gardener and a quilter/needlewoman! When Kay first met Walter, he lent her a beautiful small book, called “The Language of The Flowers”. She read it and started to fall in love with him……that was many years ago!  Her life has changed so much since then!! Together they have really enjoyed building their home and garden. Kay also has a love of plants and gardening……….more general than Walter’s, but equally as passionate. They both look for ways to enhance the garden and the atmosphere that they live in. She began her working life as a governess, but always had a keen interest in sewing from the age of 16 when she was given a sewing machine by her mother. While her children were still small, she became addicted  to patchwork and quilting………later to become a part owner of “Patches and Pieces”, a quilting shop that was at the time, located in her hometown of Saddleworth. Since then she has made over 100 quilts….large and small and sold or given many of them away. Unfortunately there is not much time for sewing these days with the garden being the priority……..but she still has her fabric stash and occasionally dreams of the next quilt!!! Her needlework skills have now extended into crewel embroidery and particularly the Jacobean style.

Both Walter and Kay have put an enormous amount of energy into developing their home and garden and enjoy sharing the garden with visitors from all over the world.